The first season in 1. division for CBS Sport Floorball was like a box of chocolats to use the  metaphor of an equally challenged individual. Experiences varied from the exceptional to the downright hideous onces, though it all ended happily with a victory in the relagation match against our arch rivals from the Police. In light of these ups and downs, a well deserved summer event certainly seemed appropriate and maybe even necesarry in the effort to maintain a good spirit in the squad.

What more obvious happening than a miniature car race can you possibly think of? Never heard of it? You’re not alone.

A trip to Albertslund was all it took to have a lot of fun mixed in with plenty of healhty competitiveness. Birthday boy, Morten, was there to get us started. Simple enough, just press the only button on the controller. Cars exploded out the grid and unto the circuit until the first corner when disarster struck. Cars went flying left and right out of the track from where it belonged and the only place from where it could be driven from. Luckily, race officials made up of innocent bystanders were there to get your car back on track. You’ll never find a more stressful role than that of a race official. Each official positioned at the turns of the circuit, was yelled at more frequently than CBS floorball players trying to defend my goal, though all in good fun.

It’s a surprisingly tricky thing, controlling the speed of a miniature car with just the gas pedal in your hand. Some did well, others were not so lucky (myself probably included as I have no idea who won the contest), but in the company of your teammates and a cold beer (or soda), everyone had a good time and bonds were strenghtened during the exercise. Due to quite a lot of doodling most of the team was able to attend and we can definitely recommend Race Fun to others seeking enjoyment and team building.

After the racing, hungry floorballers needed fuel. A feast was consumed in the CBS Sports club room at Porcelænshaven while the openning match of Euro 2016 kept us entertained. Season awards where handed out not long after. Floorball prodigy Mads took home two awards as topscorer and Player of the Year, while big brother Casper was named as Fighter of the Year and Claus as Developmental Player of the Year. Other more dubious awards were also given out including Girl of the Year (a stiff competition in CBS Sport Floorball), Time Table Official of the Year, Grossest injury and Worst excuse of the Year. The night ended, much as it began, with lots of laughs into the late hours. We all feel the positive vibe going in to the upcoming season hopefully bringing more tasty chocolats than the last.

We thank CBS Sports Pool for contributing to a great day. 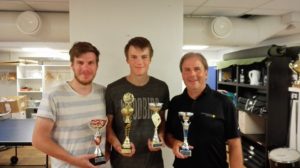