CBS Sport has the best female football team of Frederiksberg!

In the beginning of August, Joachim Satchwell – part of Football Council – was approached by DBU; a Copenhagen club had pulled their team from the third highest women’s league, meaning that CBS Sport as no. 2 in Københavnsserien, was first in line to get promoted to Kvindeserie Øst (“KSØ”) together with Østerbro.

Coach Jeppe Udklit Svendsen, took the offer up with the team – and as the biggest concern was the transportation (to ie. Raklev in Kalundborg), the team chose to accept the offer. So for the first time ever, CBS Sport was now playing in the 3rd highest league in Denmark!

August 13, CBS Sport had a cup match against Birkerød, who was last season promoted from Kvindeserie Øst to 1st Division, so it seemed like a good test of what to expect from the matches to come.

The match ended with a 0-3 defeat, but given that half the team hadn’t been to practice post holidays yet, the result was manageable and gave Jeppe and the team something to work on.

First two matches, against Østerbro and Roskilde, both ended with points for CBS Sport – a 2-2 draw against the well-known team from matches in Københavnsserien and a 3-1 win against Roskilde, a team we’d previous lost against in practice matches.

First defeat was against Hillerød – a team who was relegated last season and aiming for getting back to 1st Division. They proved to be a strong team, but despite having no central defenders in the squad CBS Sport fought well and held the game to a draw until the 85th minute when fatigue started showing and Hillerød managed to score twice towards the end resulting in a 2-0 defeat.

A clean sheet in the 1-0 victory against Greve and 4-1 victory against Sundby meant that CBS Sport had 10 points after five out of eleven matches. This meant that the goal of avoiding relegation was almost certain to be fulfilled and the team could play for more than just survival.

After this followed three matches where the results didn’t go CBS Sports way, as the opponents came away with points despite it feeling like we were the better team. Allerød won 2-1, Fredensborg managed 1-1 and BSF won 2-1.

The Fight for Frederiksberg

Following the disappointing results, CBS Sport was eager to take a victory – even more so, as the opponent was Frederiksberg Boldklub (FB). This was the first time ever, that CBS Sport and FB played in the same league with both their first teams, and thus the fight for Frederiksberg was on!

The match was covered by Frederiksberg Bladet, but long story short FB got in the lead in first half, but Margrét reduced to 1-1 on a beautiful header after a corner! CBS Sport pressured for the victory, but with 12 minutes left, CBS Sport’s defensive player, Benno was tackled hard and had to be picked up by an ambulance.. When the ambulance had left, it was too dark to continue (as there was no neighbourhood permit to turn on the lights) and as FB wouldn’t accept 1-1 as the end result, the match had to be replayed..

The match was replayed 8 days later. CBS Sport was the better team from the start and Laura was creating chance after chance as the FB defense struggled dealing with her pace. In the 17th minute the goal finally came, as Laura stole the ball from the FB defense and beat the keeper one on one. CBS Sport kept creating chances throughout the first half but the FB goalkeeper kept FB in the game. For much of the second half FB succeeded in pressing CBS Sport high up the pitch, capitalising on the fact that Bennos injury meant CBS Sport was fielding an unfamiliar centreback pair. Despite the high pressing FB was struggling to create chances, and CBS Sport was still creating chances in the other end but wasn’t able to convert them into goals. In the end FB didn’t manage to convert their pressing into goals, and CBS Sport could take home the 1-0 victory.

How to end the season.. 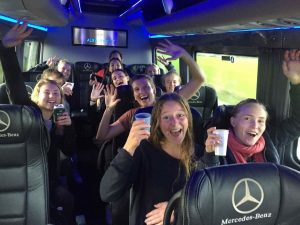 The two last matches of the season was respectively sovereign no. 1 of KSØ; Raklev who had won every match – and AB Tårnby placed second last with only one win throughout the season.
The match against Raklev was played away at Kalundborg – so thankfully CBS Sport Sports Pool granted funding for a bus, so the team could spend 1,5 hour instead of 2,5 hour by public transport. The match ended with the biggest defeat, 4-0, in a game where Raklev scored on close to every chance they created.

Last match of the season was against AB Tårnby – together with the revelation of some cool new training shirts, which Carlsberg Sportsfond had sponsored after Laura and Caroline applied for funding. 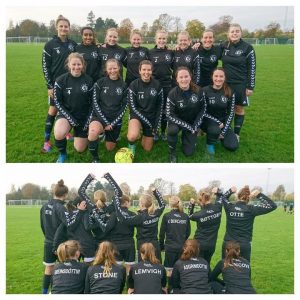 Before the AB Tårnby match, CBS Sport had a minus 1 in goal difference and one point less than FB.. With a victory, CBS Sport would get a positive goal difference and most likely end higher than FB, as they’re last match was against Raklev. Furthermore as assistant coach, Birgitte said; “they’re fighting to avoid relegation, so make sure to make it a certain win, so they don’t have the feeling afterwards that they could’ve changed the outcome” – and so CBS Sport did! Despite the terrible wet grass pitch, the offensive play worked and both Margrét, Caroline, Lisa, Kashaana and Laura was part of the four goals ending in a 4-0 victory.

As FB lost 3-1 against Raklev, CBS Sport ended above FB in the table as no. 4 – only Raklev, Hillerød and Greve made it higher than CBS Sport.

That’s what we call a VERY approved first season in the 3rd highest league in Denmark!

And let’s not forget; the right to call ourselves the BEST female football team of Frederiksberg! 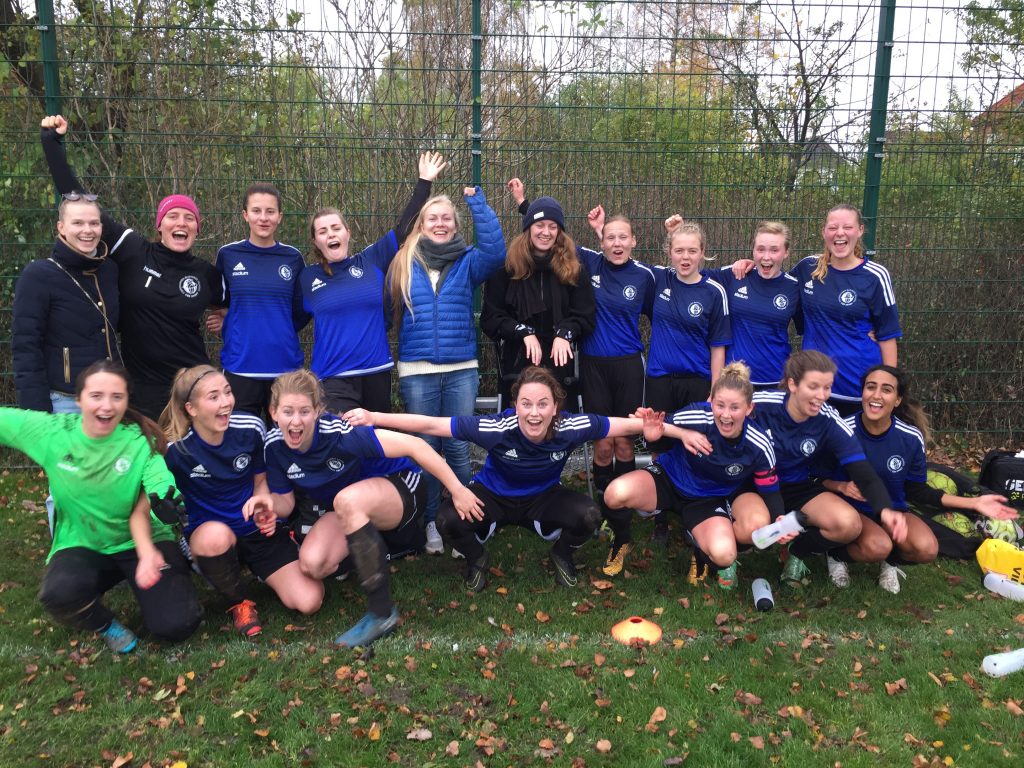