When looking back, CBS Sport took some impressive leaps in 2013 and 2014, and has been mid rank the last two years until now when a great season escalated into a promotion to Serie 2:

First taste of cup match glory came in 2012, where the team made it to 3rd round where Jægersborg Bk. from KS awaited (at the tame four leagues higher than CBS Sport). A bunch of fans made it to Jægersborg Bk with drums and excitement, and even though the match ended 2-0 in favor of Jægersborg, it was a great day!

In 2014 the fight for Frederiksberg was on, as Frederiksberg Boldklub was the opponent in 2nd round. As the venue turned out to be Frederiksberg Stadium, nothing could hold CBS Sport volunteers and fans back and the team forced FB into penalties after 2-2, before at the end being defeated. Like Joachim Satchwell so nicely said it; The dawn of a new era! 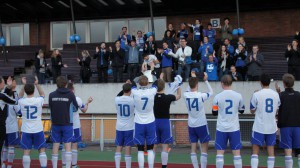 Another step on the rocky road to glory was taken 12 months later as CBS Sport again took a KS team into overtime. AB Tårnby showed no mercy in overtime and the end result was 5-3 to AB Tårnby. But what a match!

Last cup match was in June, where CBS Sport for the first time ever had made it all the way to round 4.

In round 3, CBS Sport had again forced a KS team, FK Prespa into penalties – and this time it ended 17-16 in CBS Sport’s favor after a heroic fight:

LIVE UPDATE BELOW!!!Your correspondent was held up at work, but is now on the scene to provide you with updates of this thrilling cup match between our men's first team and Prespa from KS

Tårnby FF (again a KS team) was the opponent in round 4 and unfortunetaly they made it the end of CBS Sport’s road to Europe this time, with the end result 1-2.

As an extra bonus, promotions and great cup matches also got the attention of Frederiksberg Sporting Union’s (FIU), as they in 2015 awarded CBS Sport Football ‘Athlete of the Year 2015′.

Want to be a part of the journey?

CBS Sport is looking for more players for their team in Serie 1!

It is important that you’re motivated to both practice and play matches every week and willing to be a part of a young and ambitious team, who’s here to win!

Contact assistant coach Mathias Jensen directly and arrange a try-out – it’ll be worth it!